McLaren: once the underdog, right now a big name in the supercar world. Of course the history of McLaren in terms of road cars goes way back to cars like the F1 and the SLR McLaren, but things really started to get going with the introduction of the (MP4-)12C. While it was an epic car from a technological perspective, it lacked a bit of emotion and it had a few bugs. Soon after the 12C the 650S was introduced, which proved to be everything we would’ve ever wanted from the 12C. These were all cars from the Super Series, which are more upmarket. Because McLaren also wanted to offer clients (say 911 Turbo buyers) in the lower segment of the market an option they introduced the Sports Series, with the 570S being the first car in this ‘range’. It has the same carbonfiber monocoque and V8-engine as the previous models, only with a little bit less power. Time to shine!


For starters, things are usually more complicated than for the veterans. McLaren can approve of this, the introduction of the 12C, 650S and P1 sometimes didn’t go as smooth as planned. Here and there a few problems showed up, mostly with the electronics. We haven’t heard a lot of people talking about issues with the engines yet. Which is a good thing, because the twin-turbo V8 is a lovely block which is always very responsive and keeps on pulling. Even when you’re at take-off speeds the car still wants to go faster. The 570S has a top speed of 328 km/h, or 207 mph. We didn’t quite manage to achieve the top speed, but reaching 300 km/h and above is way too easy. It’s insane how this supposedly entry-level McLaren is already so fast, we can’t imagine what the P1 does with almost 400 hp more! 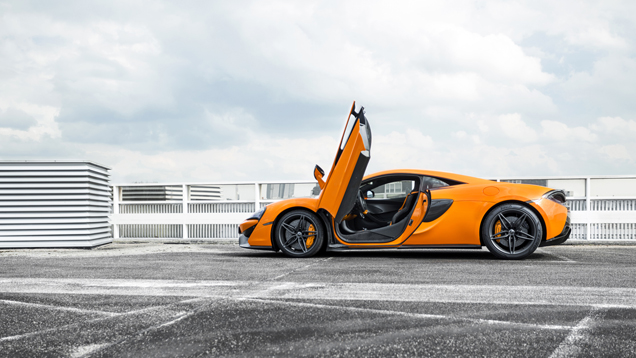 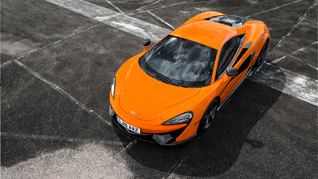 While the 12C and 650S were all about brute force, the 570S is a lot more refined. McLaren clearly listened to feedback and criticism from customers and journalists, especially the interior got a major bump in quality. There is a lot more storage space, the IRIS Multimedia system works a lot better and the instrument cluster, or screen if you will, has become easier to read. The layout of the instrument cluster depends on the selected driving mode you’re in. Choose ‘normal’-mode and you see a speedometer and a rev counter like in a normal car, albeit digital instead of analog. Switch to ‘sport’-mode and nothing really changes that much, only the coolant- and oil temperature is shown. When you set the car in ‘track’-mode however, things change dramatically: the rev-counter occupies the entire width of the screen, like the McLaren P1, and your speed is shown beneath it. Very clever, because those are the two types of information you need the most when bashing the car around on the track. So far the instrument cluster, let’s move on to the IRIS multimedia system. This is where things get interesting. It’s mostly operated via the rectangular touchscreen in the center console, important functions like climate, navigation and the homescreen can be selected with physical buttons. Neat feature: you can use your phone or your home’s WiFi-network to download over-the-air updates. The system takes a little while of getting used to but when you know how to operate it, it truly fits like a glove! 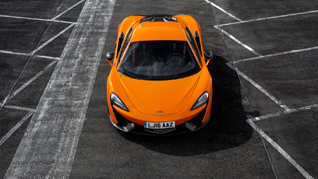 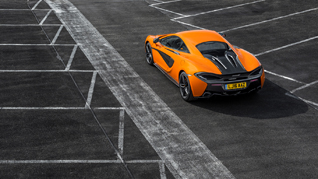 As we’ve written before the 570S is a lot more refined than any other model from McLaren so far. Yes, we know there is a 570 GT coming which is even more comfortable, but that one hasn’t been seen on the road yet. However, maybe we should take back something of the ‘refined’ bit… There is one thing McLaren left alone, and that is the soundtrack of the 570S. Take that as a positive, because while the 570S might be at the bottom of the food chain, it certainly has a big mouth. When you perform a cold start it sounds like the God of Thunder unleashed it’s wrath upon the earth! During our Rolls-Royce factory visit the car was delivered at the hotel, within seconds the car attracted a massive crowd of people who enjoyed the mighty sound and people who complained about the amount of noise. To each his own, we would say. We’re awfully sorry, but the McLaren only knows one setting in terms of sound and that is LOUD. Inside of the car you can still enjoy the whistle of the turbo’s and the deep growl of the V8 while driving along. Well done McLaren! This is possibly the first turbocharged engine which isn’t tamed in terms of acoustics compared to naturally aspirated siblings. Ferrari’s and AMG’s for example have gone a lot quieter since turbocharging became the norm in the automotive industry. 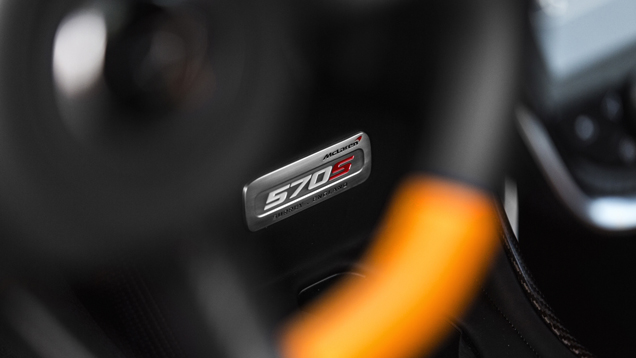 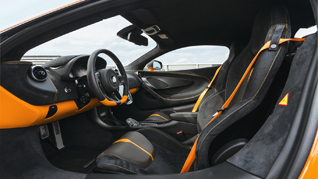 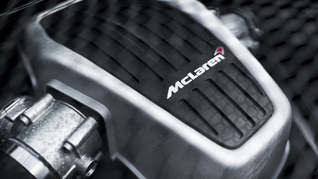 Only good things about the 570S so far, but we are not done yet! The McLaren weighs just over 1300 kilograms. Consider the fact that even a Lotus Evora weighs 1400 kilograms and you get the point: the engineers at McLaren know what they are doing. As always it sits in the small details: the rear backup light for example just weighs 50 grams! Also by using LED-strips and other kinds of novelties the weight is being kept down. While weight saving is key, the cars from the Sports Series must be able to be driven on a daily basis. The 570S also ticks this ‘box’, the different driving modes make the car a true allrounder. It would also be nice if you could bring the 570S to a standstill within a reasonable distance. Don’t worry, the carbon ceramic discs got you covered! The stopping power of these discs is uncanny, you will get to a halt within a matter of seconds! 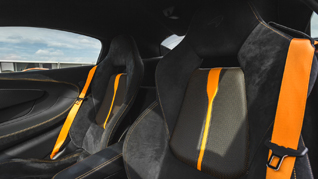 Lightweight, mid-engined: a combination that instantly gets the attention of any automotive enthusiast. Add 570 hp and 600 nm of torque to the equation and that person is hooked, guaranteed. That power is being translated to the road with such a tremendous amount of precision and mechanical grip that many supercars will feel at least a bit of envy. Every single bit of experience the engineers from McLaren gained in the past few years seems to have been put in the 570S. The car communicates everything it wants to do and it gives you, the driver, a chance to respond in an appropriate way. Only when the weather is really bad you have to be careful with the amount of throttle you give it, but when it’s dry you really have to drive like a madman to make the McLaren lose it’s grip. 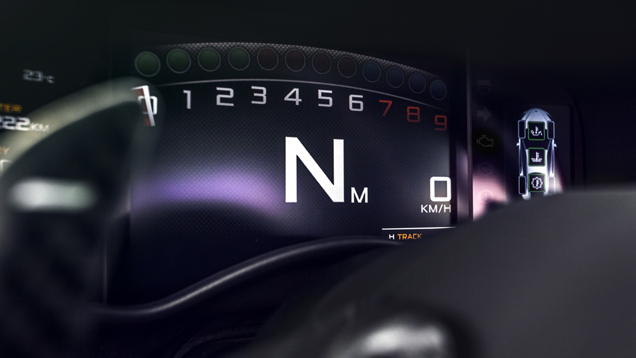 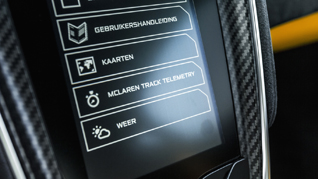 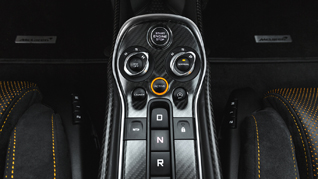 We were excited about McLaren from the moment we got in the 12C. The 650S only reinforced that belief and the 570S, well, we could go as far as to say we’re in love. The convenience, the enjoyment and the refined technology of this car make sure to give you a near-perfect experience and a huge level of excitement and adrenaline. We swear, this is a car which won’t disappoint. For the price of $184,900 US dollars it’s relatively reasonable for your wallet as well! For this kind of money we would recommend the 570S above cars like the Porsche 991 Turbo S or the Audi R8. These cars might be te ‘veterans’ we brought up in the first bit of the review, but the attention you get with the McLaren on the street surpasses them all! It’s something you have to like of course, but if you want to stand out from the crowd the 570S is definitely the car to go for! 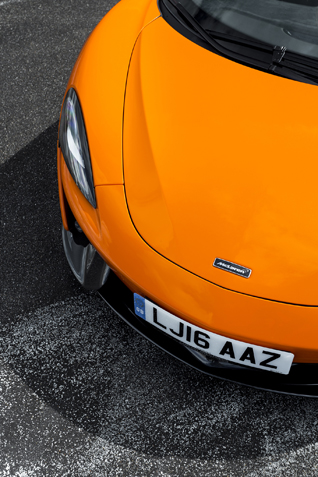