The most dynamic Bentley road car in history: The New Continental GT Speed 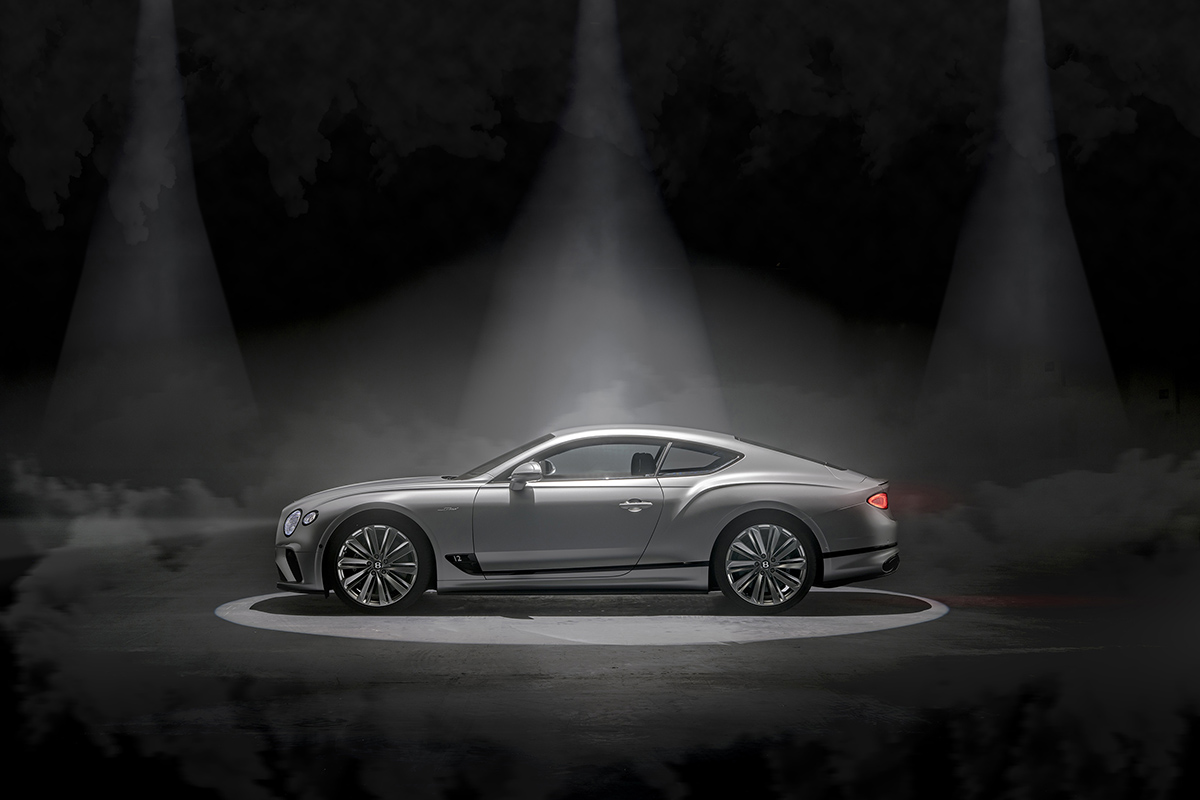 Designed, engineered, developed and handcrafted in Bentley’s carbon neutral luxury automotive factory, this new third-generation model builds on a long tradition of Speed variants. Originally introduced with the highly-acclaimed, first generation Continental GT Speed in 2007 – itself inspired by the 3-Litre Speed models of the 1920s. The latest GT Speed continues the bloodline by representing the ultimate combination of luxury and performance in a Grand Touring package.

New Electronic All-Wheel Steering enhances the dynamic nature of the Speed in BENTLEY and COMFORT driving modes. However, this is even more apparent in SPORT mode, as the steering combines with Bentley Dynamic Ride and an electronic limited slip differential for a level of agility unlike any other Bentley road car.

At low and medium speeds, the GT Speed’s rear wheels are steered in the opposite direction to the front wheels to aid a rapid change of direction, noticeably increasing the feeling of nimbleness. The steering feels sharper and with a quicker ratio, and a commensurate increase in steering feel provides even more driver confidence. At high speeds, the rear wheels steer in the same direction as the front, to improve stability. The system is significantly more active on the GT Speed than it is on the Flying Spur, where its primary purpose is a reduction in turning circle and enhanced high-speed stability.

Featuring Active All-Wheel drive, the traction control and torque distribution has been recalibrated in all driver modes to provide a noticeable character shift relative to the standard Continental GT.

Maintaining Bentley’s philosophy of the vehicle feeling progressive and secure, yet still be dynamic, this approach rewards drivers of all abilities. To achieve this philosophy in BENTLEY and COMFORT mode, overall grip is balanced between the front and rear wheels, in SPORT this mode has been calibrated with a more rear-biased torque–split in all driving scenarios.

For the first time in a Bentley, the latest generation of the Continental GT Speed introduces the use of an electronic rear differential (eLSD).

Continental GT Speed – Thrilling Performance
The new GT Speed is the ultimate performance-focused expression of Bentley’s definitive Grand Tourer, yet maintains the luxury, comfort and usability of its siblings. It is equipped with an uprated version of Bentley’s renowned 6.0-litre W12 TSI engine, delivering 659 PS (650 bhp) – a 4 per cent increase of 24 PS over the current W12 model – whilst maintaining an extraordinary 900 Nm (664 lb.ft) of torque. With exceptional handling, this results in a top speed of 208 mph (335 km/h) and 0-60 mph in 3.5 seconds (0-100 km/h in 3.6 seconds), a reduction of 0.1 second.

Both engine and transmission have been deliberately calibrated to suit the car’s driver-focused credentials. This is most noticeable in SPORT mode, where the twin-turbocharged W12 has been tuned to keep the engine in the power band longer by up-shifting later, or downshifting earlier. This creates a more eager response to the driver’s throttle inputs.

The dual-clutch, eight-speed transmission shift is twice as fast in SPORT mode as in the standard W12 model, in keeping with the Speed’s ethos. This combines with a greater exhaust character during start-up and downshifts.

Not only does the Continental GT Speed offer impressive performance, to maximise efficiency the model benefits from Bentley’s Stop-Start technology where the engine rests not only when the vehicle is stationary, but also at near-to-stop speeds.

Bentley’s Variable Displacement system shuts down half of the engine’s 12 cylinders under certain conditions with the transitions between the two being imperceptible to the driver. Intake and exhaust valves, fuel injection and ignition are all shut down on defined cylinders, with the engine running as a six-cylinder for improved fuel efficiency.

Exterior Detail – GT Speed’s Statement of Intent
The muscular bodywork of the Continental GT has been amplified still further on the GT Speed. Unique exterior detailing complements a powerful, athletic stance, blending seamlessly with the effortless elegance inherent to the Continental GT.

Another signature feature of the most potent version of the Continental GT is unique, 22” Speed wheels in bright silver, with the option of a dark tint or black gloss finish. “Jewel” versions of the fuel and oil filler caps are standard, while illuminated Bentley treadplates to both sills are a nod to the Speed’s performance credentials. 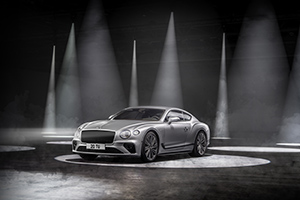 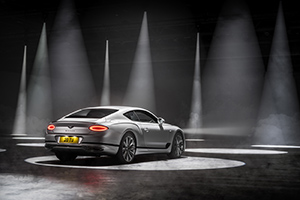 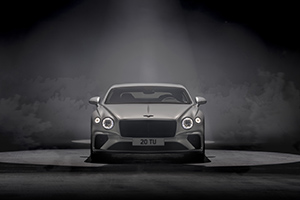 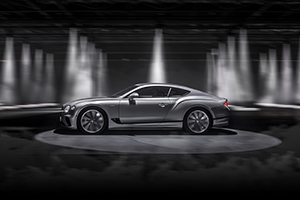 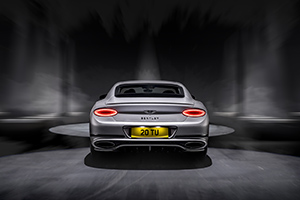 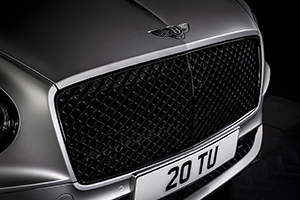 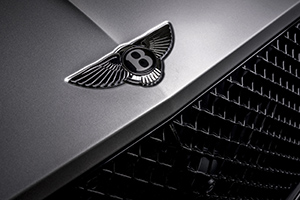 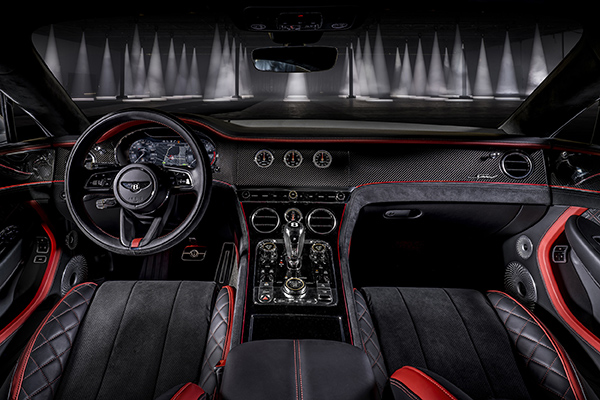 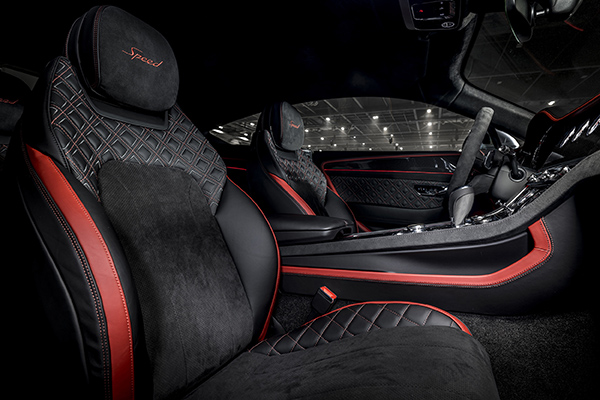