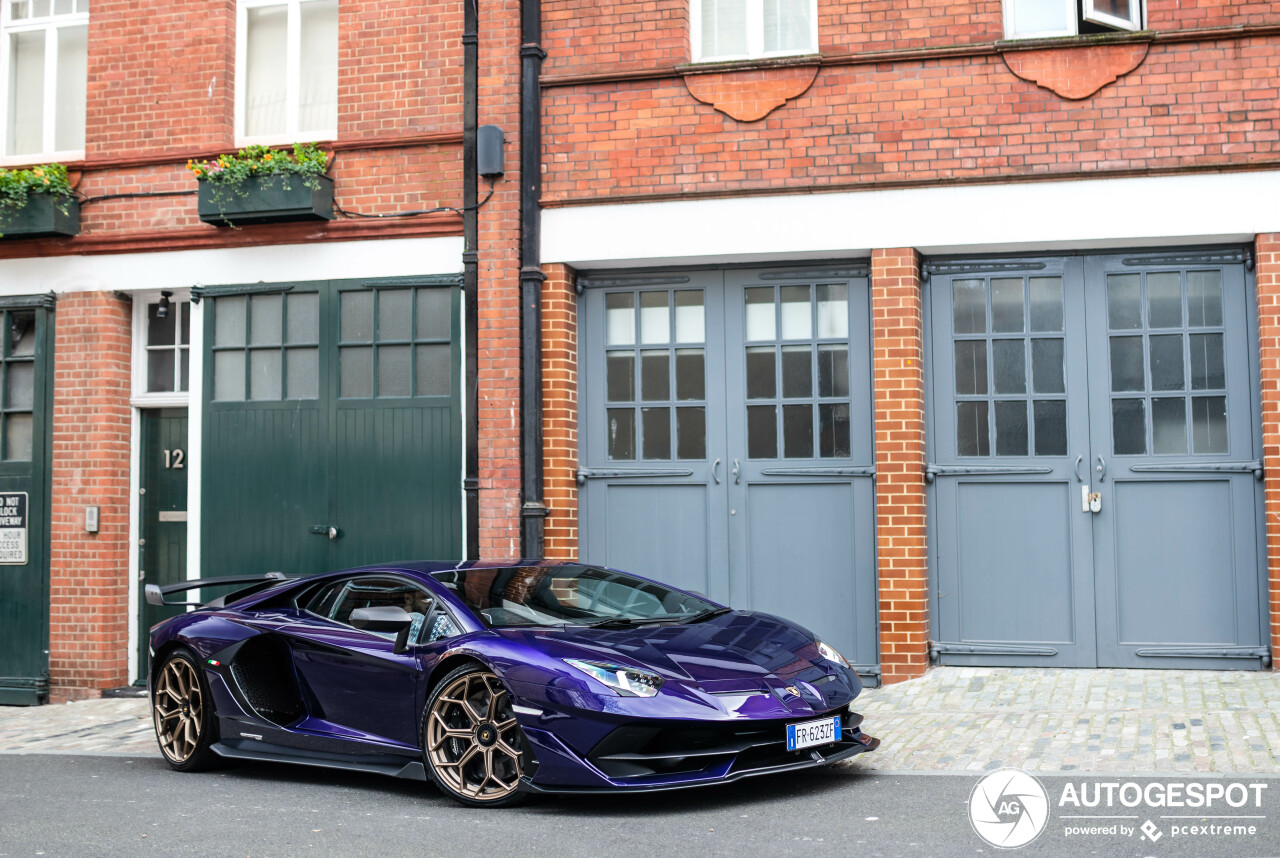 Lamborghini has taken the Aventador to the extreme with the LP770-4 SVJ. Spotted by TFJJ in London, this SVJ looks stunning in the purple finish. The SVJ's eye catcher is of course the rear wing. It was designed for the best aerodynamic efficiency, based on a new air foil; an optimized ALA 2.0 system; and side winglets to reduce turbulence while providing high downforce on the straight as well as in high speed corners.

At the rear of the car the position of the high-mounted naked exhaust resembles those found on extreme motorbikes, as well as saving weight due to its proximity to the engine: the exhaust system itself is also lighter. The Omega-shape rear bumper incorporates a massive new diffuser that contributes to downforce, while a new high-mounted rear wing is produced entirely in carbon fiber with its integrated ALA system.

The new rear engine bonnet has been redesigned for the SVJ: it is made from lightweight carbon fiber and removable via quick release clips in a reference to motor racing. It also adopts the ‘Y’ theme that reveals the updated V12 power plant below, while accenting the car’s high performance characteristics. Super-light ‘Nireo’ aluminum rims are designed specifically for the SVJ, saving weight and contributing to the extreme dynamism of the car. Optional ‘Leirion’ aluminum rims with ‘Y’ and hexagonal details are also available. The Italian flag detail on the side wing is a reminder of the Lamborghini’s Italian super sports car heritage.

Lamborghini’s patented ALA system was first seen on the Huracán Performante, and has been developed to an enhanced level for the Aventador SVJ, now ALA 2.0, including new optimized air inlets and aero channel designs. The system has been re-calibrated taking into account the enhanced vehicle’s lateral accelerations. The ALA system actively varies aero load to achieve high downforce or low drag, depending on dynamic conditions. Electronically-actuated motors open or close active flaps in the front splitter and on the engine bonnet that steer the air-flow, front and rear.

Utilizing Lamborghini Dinamica Veicolo Attiva 2.0 (LDVA 2.0) with improved inertial sensors that govern all the car’s electronic systems in real time, the ALA system flaps are activated in less than 500 milliseconds to ensure the best aerodynamic set-up of the car in every driving condition. When ALA is off, the active flaps are closed, generating the desired high downforce for high speed cornering and full brake conditions. When ALA switches to ‘on’ the front flaps are opened, reducing air pressure on the front spoiler and directing air flow via an inner channel and through the specially-shaped vortex generators on the underside of the car. This drastically reduces drag and optimizes conditions for maximum acceleration and top speed.

When ALA is off the rear flaps are also closed, allowing the rear wing to act as a traditional fixed wing. Stability is enhanced in high speed cornering and full braking by creating maximum vertical downforce. When ALA is ‘on’ the flaps on the engine bonnet open in order to stall the wing for improved drag in high speed conditions.